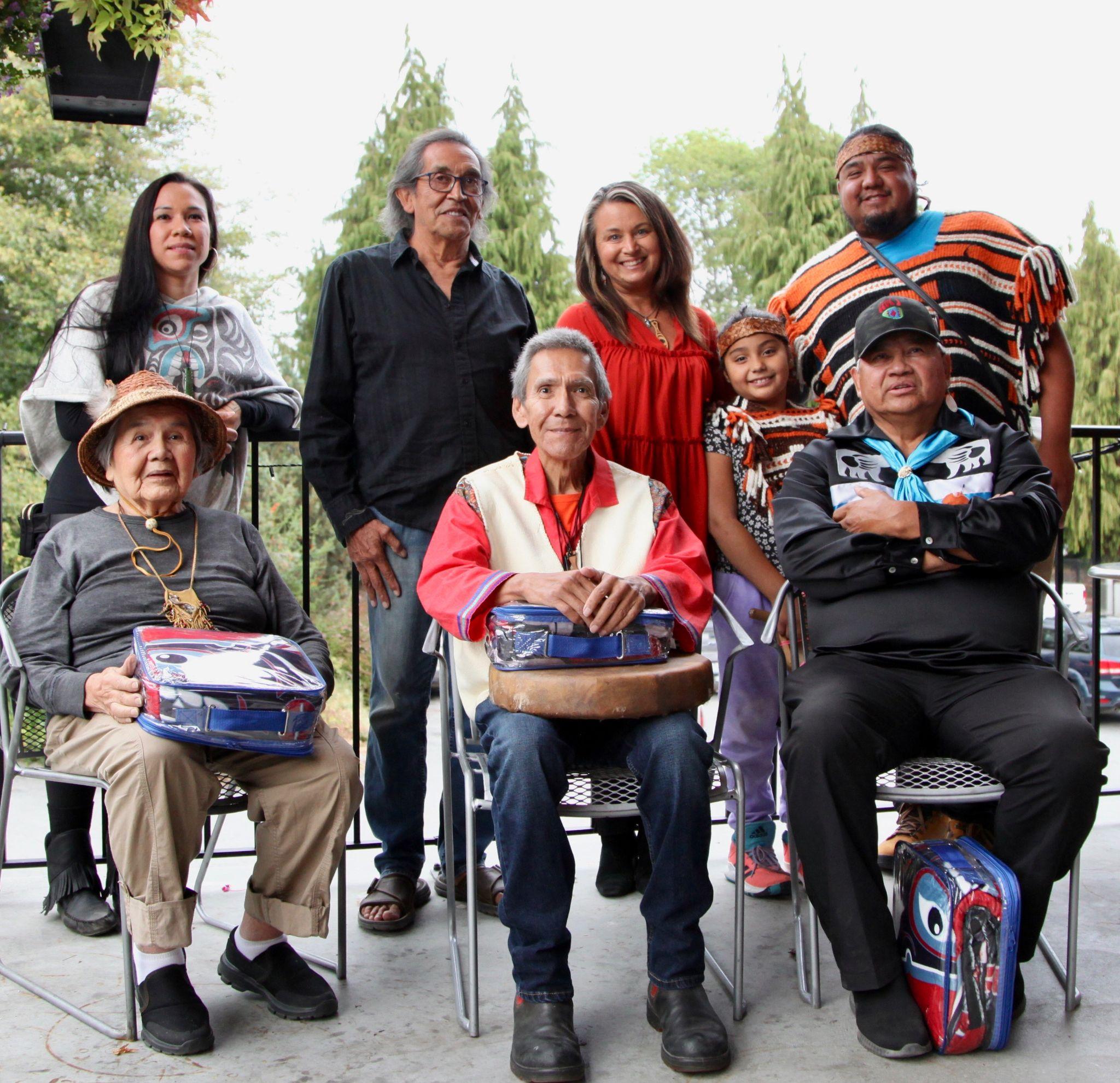 With production funding from TELUS originals, this feature-length film spotlights the work of three Indigenous changemakers who are determined to halt intergenerational trauma. Stories of hope and homecoming intersect, as three visionary creators work with their communities. Charlene SanJenko of Splatsin in the Secwépemc Nation (Shuswap,) Alfonso Salinas of the shíshálh Nation and swiya (Sunshine Coast,) and Ecko Aleck of the Nlaka’pamux Nation (Lytton,) are documenting and learning the traditional cultural teachings of their Elders.

In a joint statement, SanJenko, Aleck and Salinas say, “As Indigenous multimedia creators, and as parents, we are deeply committed to healing, finding our voice, and speaking our truth. We can make a profound difference in our families and our communities both now and into the future, as this documentary will show. As directors of our own projects, and as producers and writers in collaboration with settler changemaker and award-winning director Liz Marshall, we are sharing the stories of our Indigenous Elders with the world so that their voices are heard, and their knowledge and wisdom is shared with an ethic of care. The teachings of our Indigenous Elders are needed now to navigate a changing world. We are innovating a collaborative filmmaking approach, rooted in Indigenous values that centers our well-being, our Elders, our communities and our knowledge keepers. This foundation is woven through every aspect of this project, and will ripple out and beyond.”

“As reflected in our film’s Mission Statement, we acknowledge that Indigenous culture, spirituality, values, beliefs, philosophy and intellectual property have existed since time immemorial. We look forward to making this film, to its impact, and to sharing our documentary archive with the Indigenous communities we are working closely with,” says director Liz Marshall. “As a resident of the Sunshine Coast, the unceded homelands of the shíshálh and sḵwx̱wú7mesh Peoples, and as a filmmaker, I’m committed to syiyaya, meaning “family and friends” in the sashishalhem language. The syiyaya Reconciliation Movement is a grassroots visionary initiative working toward systemic change locally and in Canada, jointly created by the Indigenous and settler communities of the Sunshine Coast. My aunt Nancy Budd-Denham co-founded syiyaya with formerly elected shíshálh Chief Garry Feschuk,” says Marshall.

“Our ancestors have been brewing this for a long while,” says Ecko Aleck, the film’s composer, co-producer and co-writer. Aleck is building a multimedia repository called “Legacy of the Land” through her company Sacred Matriarch Creative, “It journeys through history, storytelling, and offers teachings for the healing of all people and the planet.” ELDERS’ PROJECT follows Aleck as she documents the life story of her father Terry Coyote Aleck, a gifted drummer and storyteller, and a residential school survivor who reported his abuser to the RCMP in 1987. Legal proceedings resulted in a landmark case to hold the government and church liable for sexual abuse in the 1960s and 70s. He found healing through connecting with medicine people from around the world and is now passing along those teachings to his daughter. Aleck is also in the process of documenting the story of her great aunt, Elder N’kixw’stn, a sweat lodge leader, medicine woman, knowledge keeper and family history holder. She is a well-respected Vietnam war veteran and has outlived various illnesses by turning to traditional medicines and the land for healing.

Alfonso Salinas, the film’s co-producer and co-writer is a Capilano College film grad. As the Traditional Wellness Coordinator with the shíshálh Nation, Salinas has been overseeing the documentation of the ground penetration radar (GPR) scanning for unmarked residential school graves, and recording the stories of survivors through his company Mayukw Productions. “My commitment to our healing will be done in different ways, and filmmaking is a key vehicle in capturing the truth before it’s gone,” says Salinas. His vision for healing is to help initiate the return to sacred canoeing in the waters of the shíshálh Inlet. ELDERS’ PROJECT follows Salinas as he works toward a monumental traditional feast and canoe ceremony with his Nation, supported by shíshálh Elder Barbara Higgins, an oral knowledge keeper, “It’s an opportunity to gain our identity back,” he says. Through Salinas, the film comes to know the teachings of his grandfather, hiwus Calvin Craigan, a shíshálh Elder, hereditary Chief, and the youngest Indigenous chief ever elected in Canada.

“I’ve known since I was five that I am adopted, but it took until almost 50 to prove my Native status. As a child removed from my community and placed into foster care, I often wondered where I belonged and struggled to feel at home anywhere,” says Charlene SanJenko, the film’s impact producer, co-executive producer, and co-writer. ELDERS’ PROJECT follows SanJenko as she makes her first documentary, following the story of Chief Wayne Christian, a ‘Sixties Scoop’ survivor. In 1980, as a young father and Chief, Christian led a march and demonstration known as the Indian Child Caravan, from Prince George to Vancouver to fight for Indigenous People’s rights to make their own decisions on behalf of their children.

Together they have launched “Our Nation Heals” through SanJenko’s impact agency reGEN Media, to combine the power of Indigenous storytelling, digital media arts, and the rippling impact of co-facilitated small-group listening circles to inspire others.

A timely model for narrative collaboration, ELDERS’ PROJECT is co-written, directed, and co-produced by award-winning documentarian Liz Marshall of LizMars Productions (Meat the Future; The Ghosts In Our Machine; Water On The Table; Midian Farm.) “During a time of climate emergency, the world needs Indigenous land-based and medicine teachings more than ever before,” says Marshall. “It’s an honour to be a Learner on this journey with the shared intentions of our equally Indigenous and settler film team.”

“ELDERS’ PROJECT will be an inspirational catalyst for hope and healing by demonstrating what is possible and encouraging the conversations and dialogue needed to ignite that possibility into action.” says impact producer Charlene SanJenko. “Through a comprehensive impact campaign both community-based and online, our goal is to reach other creators, parents, and storytellers and encourage them to utilize the power of story to heal in their own families and communities.” SanJenko is the founder of reGEN Media, North America’s only Indigenous-owned and female-founded media impact agency. 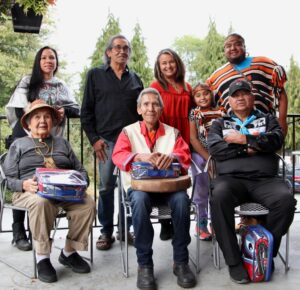 ELDERS’ PROJECT is made possible with production funding from TELUS originals, and development funding from Creative BC.

Principal photography commences September 2022, with delivery slated for August 2023. Filmed on the unceded homelands of the shíshálh and sḵwx̱wú7mesh Peoples, the Splatsin Band of the Secwépemc Nation, and the Nlaka’pamux Nation.