Water on the Table

Water on the Table

Featuring best-selling author, activist and public figure Maude Barlow and her crusade to have water declared a human right, protected from privatization, WATER ON THE TABLE explores Canada’s relationship to its freshwater, arguably its most precious natural resource. The film shadows Barlow over the course of a year as she leads an unrelenting schedule as the U.N. Senior Advisor on Water to Father Miguel d’Escoto Brockmann, President of the 63rd Session of the United Nations. 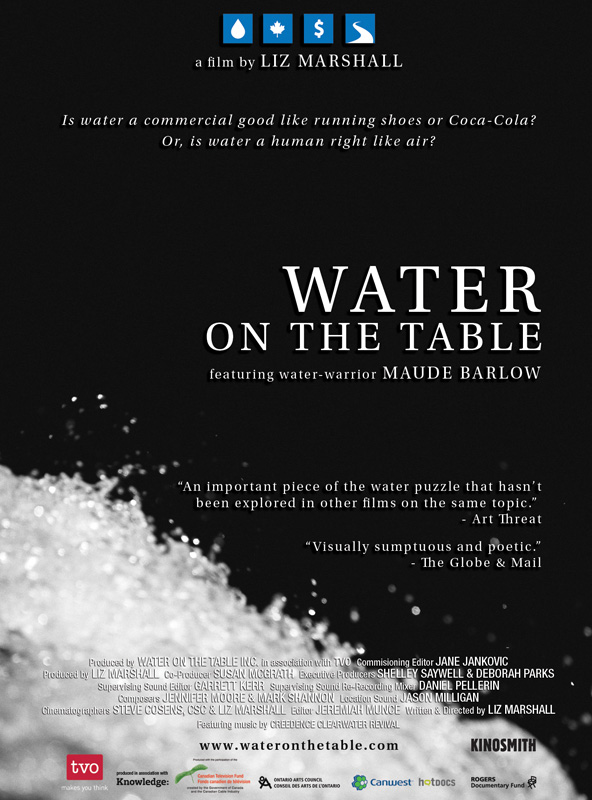 Every so often an idea sticks and won’t go away, it then requires dogged determination to usher it into the world. WATER ON THE TABLE is an example of such a film that needed to be made, no matter what. It began in 2003 when I read Blue Gold, Maude Barlow’s first book about the global water crisis, I was deeply inspired by her vision and commitment to “water justice.”

Fast forward to 2007, when I set forth (tenaciously) to raise funds for an epic film concept that would: a) intimately feature Maude’s crusade to have water declared a human right, b) explore Canada’s water from both a celebratory and political perspective, c) present strong opposing views from experts in Canada and the U.S.

Not an easy film to pitch or to fund – especially during a time when the film and television industry was experiencing a wave of ‘water fatigue’. I persisted and production was greenlit right at the time when Maude Barlow was appointed Senior Advisor on Water to the President of the U. N. General Assembly! This powerful storyline informs the film.

With the help of a stellar team of filmmakers WATER ON THE TABLE was released in 2010. My hope is that it touches hearts and minds and significantly contributes to the growing movement to have water declared a human right.

Commissioned by TVO for The View From Here.

“This is an important film, beautifully constructed, seriously examining the values we put on water.”
-Great Lakes WATER Institute

“Director Marshall delivers a great portrait, while also giving voice to the many counter-arguments, for a balanced but ultimately persuasive plea for Barlow’s case that potable water be included as a human right.”
-EYE Magazine

“A documentary that’s pointed but visually sumptuous and poetic.”
-The Globe and Mail